The first church on the site was a Norman one, built in the 11th Century, and was one of forty-nine churches in Lincoln! 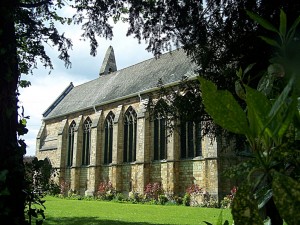 This building was so badly damaged in the Civil War during the siege of 1643 that it became almost a ruin. In 1776 the church was pulled down, and a small “mean” church took its place in 1781. This proved inadequate for the larger congregations of Victoria’s reign, and in 1870 the present church was built. The East Window was designed by Ward and Hughes who were responsible for the Victorian glass in the North Aisle of the Cathedral Nave. The entire cost was £2,500. The architect was Sir Arthur Blomfield (to whom the famous novelist and poet, Thomas Hardy, was an architectural assistant until 1869).

In 1914 the south aisle was added to enlarge the church still more. This work has enhanced the architectural interest of St. Peter’s with magnificent stained glass windows. The Rood Screen was added at this time.

The three oldest survivals from the Tudor period are the Parish Registers begun in 1538 (now in the County Archives), an Elizabethan chalice of c. 1569 and the tombstone of a medieval mayor of the city.

First church.  During the Civil War it was dismantled and stripped of its furnishings.  It remained in ruins for over a century.

Second church. Consecrated by Bishop Thurlow.  The parishes of St. Peter and St. Margaret-in-the-Close were united together.

Decoration of the church – Mr. Bodley ARA was commissioned.  Some of his decoration can still be seen in the chancel.

By the generosity of Alfred Shuttleworth there was the addition of the South aisle, west porch and the choir vestry. Nave ceiling was enclosed as a ‘barrel roof’, the Rood Screen erected and St. Margaret’s Chapel, south aisle was dedicated.

Pews sold off and removed from church. Church transformed with the purchase of new chairs.